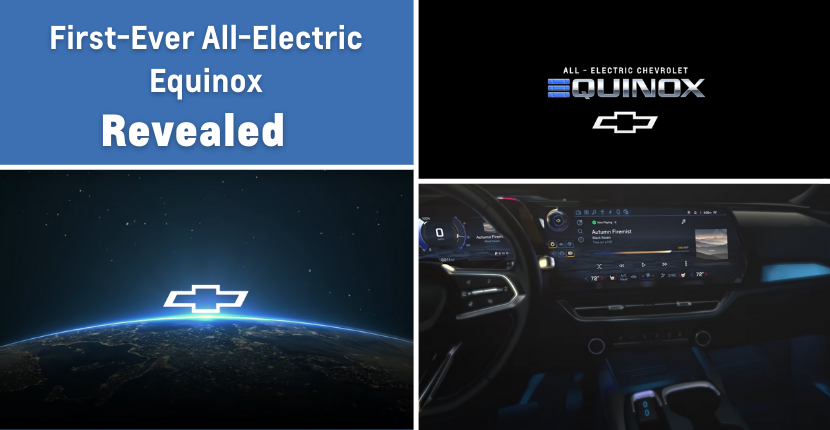 Chevy’s top-selling SUV redesigned with the First-Ever All-Electric Equinox. A futuristic interior featuring an innovative infotainment system and personalized ambient lighting makes every drive a new experience. The Equinox EV LT will start with an MSRP around $30,000. While the availability of the LT model will be announced at a later date, the 2024 Chevrolet Equinox EV RS is available Fall 2023. Learn more about Chevrolet EVs now at Mike Anderson Chevy of Chicago!

Recently, Chevrolet released a teaser video of the Chevy Equinox EV interior. One thing we know is that the Chevy electric car will feature the same large touchscreen display from the Silverado EV. It will also come with a fully-digital instrument cluster and GM’s hands-free Super Cruise technology.

The teaser video shows the Equinox’s dashboard, which shows styling X-shaped air vents and ambient lighting. It gives a closer look at a two-tiered armrest with large cup holders, two easily accessible USB-C ports, physical climate controls, and upper and lower storage areas. The video should make customers excited about Chevy electric cars. Keep in mind, though, that some details could change before the Equinox EV is released next year.

Powered By Ultium and Ultifi

Ultium powers the future. Designed from the ground up to power our all-electric lineup, the Ultium Platform is Chevrolet’s electric solution for the future — making electric propulsion, exhilarating torque and zero emissions driving possible. It will power the electric Equinox.

Furthermore, Ultifi is GM’s software platform that will usher in a new era of software-defined vehicle experiences and services. It will enable seamless delivery of upgrades, personalization options, and new and exciting apps to drivers on demand, plus regularly pushed software improvements.

Electrifying Chevrolet, One Vehicle at a Time

Chevrolet showed the world how simple and smart owning an electric vehicle can be — but that was just the beginning. With GM’s Ultium platform and Ultifi technologies to power most of our vehicles, we’re heading towards an all-electric future. Chevy wants you in the passenger seat for all the innovations, announcements, and reveals as Chevrolet creates some of the most exciting and advanced vehicles in Chevrolet history.

At Mike Anderson Chevrolet of Chicago, we are one of the area’s premier Chevrolet dealerships. We have a huge selection of Chevy cars, trucks, and SUVs for you to choose from. Founded in 1969 by Bob Anderson, Mike Anderson Chevy Chicago is proud to continue to serve the community with a great selection of vehicles and top-notch customer service to everyone who walks through our doors. So visit your Chevy dealer Chicago to learn more about the Chevrolet all-electric future!