What’s The Difference Between AWD and 4WD? 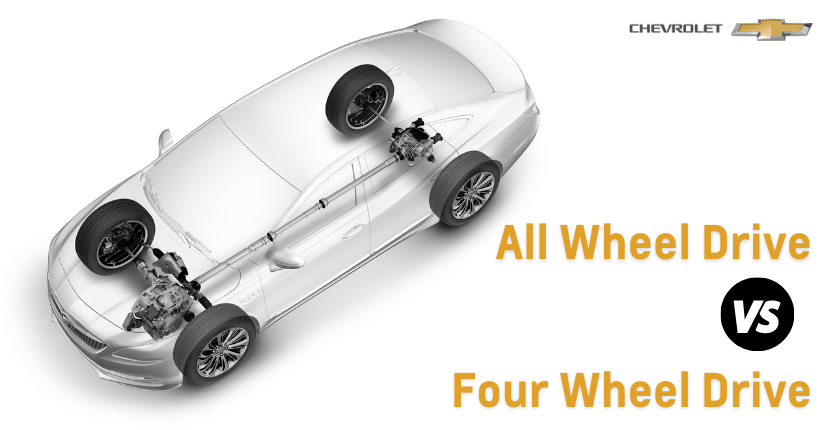 With the steadily rising popularity of SUVs and CUVs, many drivers want either all-wheel drive (AWD) or four-wheel drive (4WD). While they both provide great traction and control, AWD and 4WD are often mistaken for each other despite their differences. Still, it’s important to understand their differences because using the correct one could impact your safety out on the road. Find a vehicle equipped with AWD or 4WD now at Mike Anderson Chevy!

What Is All-Wheel Drive?

An All-Wheel Drive system delivers power from your vehicle to all four wheels at the same time for the entire time you are driving your car. However, with active AWD, the amount of torque allocated to each wheel varies across time. Active AWD will typically operate with either a front or rear bias. The AWD system directs power to your vehicle’s axle when traction is needed at one or more of the other wheels. It also typically uses a center differential (there are many different types) that enables the front and rear wheels to operate at different speeds.

What Is Four-Wheel Drive?

Developed to maintain optimal traction when manually selected, Four-Wheel Drive means the front and rear driveshafts can be locked together to move at the same speed and distribute the same amount of torque to all four of your vehicle’s wheels. In general, it is intended for off-road use and on very slippery surfaces, such as inclement weather. There are also several different types of 4WD:

Difference Between AWD And 4WD

How They Work In Snow

Another important difference between AWD and 4WD is that they perform differently when driving in inclement weather like snow. However, it really depends on how much snow there is and the setting of the drive.  While AWD is better for driving on a snowy highway, 4WD is best for driving over a snow-covered flat field. Which one is right for you will depend on what setting you typically drive in.

Looking for a Chevy dealership in Chicago? At Mike Anderson Chevrolet of Chicago, we are one of the area’s premier Chevrolet dealerships with a huge selection of Chevy cars, trucks, and SUVs for you to choose from. Founded in 1969 by Bob Anderson, Mike Anderson Chevy Chicago is proud to continue to serve the community. We have a great selection of vehicles and top-notch customer service to everyone who walks through our doors. Visit our Chevy Service Center to learn more about AWD vs 4WD, Chevy parts, and more!